Schools In The Parish

Our Lady Help Of Christians Parish School is the primary school located next to the church. The School began in 1989 with Sr. Mary as its first Principal, with five teachers and 105 students.

The idea for a school in the Ambarvale area was first considered in 1985. St. John's Parish, under pressure from increasing enrolments and further housing development in the Ambarvale-Rosemeadow area, conducted a survey into whether a school should be built in the local area. In 1988, the school became a reality when the first stage of the school commenced in the latter part of the year and was completed prior to the opening of the 1989 school year. The official opening of the school took place on May 7, 1989.

The School Motto is Seek Wisdom, Love God and is based on Ecclesiasticus 4:11-18, "God loves those who love wisdom".

The school crest incorporates symbols that are designed to be understood by young children. The candle and lamp symbolise wisdom, the star symbolises life beyond our earthly human existence, and the symbol of the light radiating from the candle in the form of a heart is synonymous with the great love God has for His people.

The school strives for excellence in education by developing the whole child spiritually, academically, physically and socially through the provision of quality learning and teaching. In the words of a previous Principal, "The person of Jesus is the centre from which our school finds its credibility, as our faith is at the heart of who we are. Our Lady Help Of Christians offers a culture where students are invited to experience learning within the context of Catholic Education". 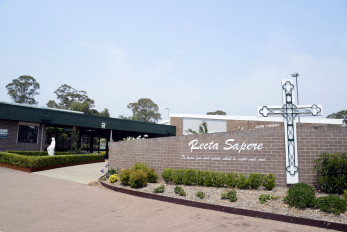 John Therry Catholic Catholic College (Years 7-12) is located next to the Church and was established in 1981 under the principalship of Brother Clarence Cunningham. The official opening of the School took place on April 24, 1983, with the School being blessed and opened by Bishop William Murray.

Father John Therry was also responsible for the building of Saint Bede's Church at Appin, the oldest Catholic Church in continuous use on the Australian mainland, in 1837. St Bede's Church is part of the Our Lady Help Of Christians Parish.

The school’s mission statement is "To create a learning environment based on Catholic faith which empowers students and staff to achieve their potential as individuals in the wider community". They strive for graduates of John Therry to be confident and courageous young men and women who make a positive difference in their world. The School’s aim is to assist each student to achieve their spiritual, academic, sporting and social potential.

The school motto is Recta Sapere – “to relish what is right and just”. The School emblem consists of a Shamrock, Cross and the Stars of the Southern Cross. These items represent Father John Therry's Irish Background, the faith of the Catholic Church and our home country Australia.